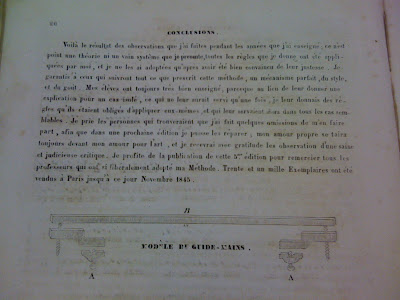 Kalkbrenner was probably the foremost virtuoso in Europe and a prolific composer in the early part of the 1800's.

He also was a successful teacher and part-owner of Pleyel Pianos. He almost convinced Chopin (at least superficially) to take lessons from him, and Chopin dedicated his first concerto to him.

Kalkbrenner devised a method which used a wooden bar to support the forearm so that NO muscular intervention from the arms could intervene in playing.

the effect on the playing is a clearer, more articulated and intelligent interpretation in my opinion. Nevertheless there is a difference in phrasing and overall 'sound' which was preferred at the time.

Unfortunately today's heavy actions make this kind of playing impossible without risk of tendinitis, but at the time, the actions were as light as they could get them because the technique was indeed built on finger-movement.


What you see in the picture is the guide-mains as illustrated in Kalkbrenner's book on technique. He mentions in the print that he sold 31,000 Guide mains in Paris alone as of 1845, which probably means an average of 3,000 a year for a decade!