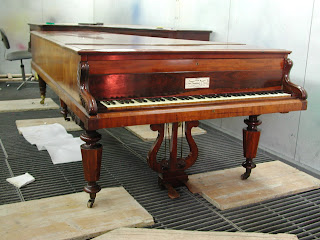 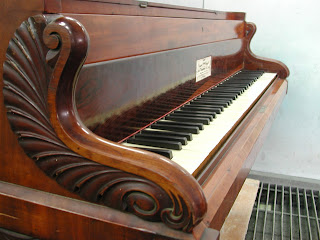 This is an 1845 Broadwood, similar to the one Chopin played in England for his last tour, which was at the time part of the hire fleet.
The first person to have hired the piano was Lady Charlotte Canning, AKA Viscountess Canning, Lady In Waiting to Queen Victoria. The second person was Lindsay Sloper, a famous (at the time) Pianist, who was one of the very few students which Chopin received in England in 1848. Sloper also holds a place in Chopin's history as being the man who presented Jane Stirling to him.
Another curious Chopin-related fact is that the Piano was only down the Block from Chopin's Piccadilly apartment in 1848, at Leon Jablonski's home.. aPolish Patriot responsible for translating Conrad Wallenrod in English. Chopin used this famous Polish bit of literature as the foundation for one of his Ballades.
Knowing that Chopin usually went to call on his fellow patriots, it is likely that he may have had played this piano .

The Piano has had some major work done to it, and is still undergoing restoration.. we'll see how it turns out in a few months!
Pubblicato da ACORTOT a 04:12